Skip to content
Home>Blog>Travelling with Tattoos: “Can I go to Japan if I have tattoos?”

COVID-19 UPDATE - WE ARE HERE TO FILL ONLINE ORDERS - ALL ORDERS ARE SHIPPED WITHIN 48HOURS - THANK YOU FOR YOUR SUPPORT & STAY SAFE!

Travelling with Tattoos: “Can I go to Japan if I have tattoos?” 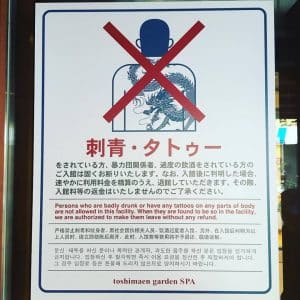 This is a question very rarely asked –yet it should be. Since irezumi (traditional Japanese tattoos) are so popular worldwide, there’s no reason travelling to Japan with tattoos would be a problem… right?

Wrong! While evidence suggests that tattooing was the norm in the culture for centuries, the Edo Period (1603-1867) changed that.

During this time, criminals and courtesans were marked with tattoos. This is how a stigma was born. As well, bakuto (gamblers) got full body tattoos, and showed off these tattoos while they dealt cards. It’s believed this inspired the tattoos of the yakuza (gangsters). Eventually, tattoos were outlawed entirely.

So if that’s the case how did irezumi get so popular worldwide?

Thankfully, a loophole existed: Japanese artists could tattoo foreigners. Their clientele became sailors and other travelers. Irezumi grew to global prominence by way of survival. Finally, in 1948 the ban was lifted. Sixty years later, we should be good to go then, right?

Sorry – but not really. Tattoos are still viewed as the mark of a criminal in traditional circles and most of Japan is still very traditional. And as such, there is still a strong stigma around them.

As tourism grows in Japan, some businesses are loosening their rules, but most gyms, bath houses, and onsen (hot springs) won’t allow tattoos. Those that do still require you to hide the tattoo under a bandage.

Where do you want to travel to? What are their attitudes towards ink?

Update 18 July 2018: Jen from Facebook has gone to Tokyo and the Osaka areas of Japan and the locals didn’t bat an eye! If you have experience travelling to Japan with tattoos, let us know! We’d love to curate a list of tattoo friendly places! 😁

About the Author: Amanda

Amanda is BodyMods' head office and marketing manager. She maintains our social media, blog, and the Modipedia, along with planning our BC SPCA fundraising events. Outside of work she loves hiking with her dog, movie nights, and collecting house plants and crystals.